Review: Blue Into The Rip by Kev Heritage 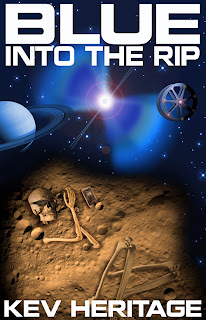 Blue Into The Rip
by
Kev Heritage
Available through Amazon in Kindle format and pasperback, B&N in Nook format,
Createspace in paperback, and Smashwords in various e-book formats.

If you like fast paced, intriguing, thought provoking, character driven science fiction, then this book is for you.

Blue is a typical teenager, attending school, looking after his little sister, and putting up with his hippie parents. Until, one day, he is ripped out of his present and flung far into a future where the Earth has undergone some extreme changes. One of which is the military academy Blue finds himself rescued by and inducted into, in a future where the world is not what it used to be. Ravaged by climate change the only refuge is an under ground Desert Amazon. Blue finds life quite a bit different, especially as he is inducted into said military academy as a cadet, who only wants to return to the past. His past.

Blue is put to several tests and finds he does have some affinity for what he's supposed to be learning, but along the way, he discovers how the Earth got into it's present state. At one point, he visits the Museum Of Indulgence, which houses such diverse Earth artifacts as Stonehenge, the statue of Michelangelo's David, remnants of the Sistine Chapel, the head of the Statue of Liberty, some of the most famous paintings to have ever existed by the likes of Van Gogh, Rembrandt, Warhol, Picasso, Dali, etc.
He comes upon a gallery with a screen projecting how the world used to be, then another showing the wars, the pollution, the riots and finally the devastation of famine, the disease that followed starvation, poverty, then another gallery depicting the fall of civilization -raging fires in China, the US entirely covered by a hurricane, earthquakes devastating Northern Europe, Tsunamis, volcanic activity on a massive scale.

Still resolved to get through this academy and back home, Blue makes friends with the other cadets in his squad, steeling himself for the day he is instructed in rip technology, the way he will "rip" his way back to his time and his family.
Interspersed throughout the book are definitions of certain words, phrases, or people, which although I knew most of them, I found them a help, expanding on the reading experience the way they were used, much better than the inclusion of a glossary in the back of the book, with the words asterisked for reference or intruding foot notes.

Does Blue make it back to his Earth and his time?
Read the book and find out.

Read the book with the underlying lesson about climate change, which isn't preachy- it's so well woven  into the fabric of the story, you don't feel like you're being beaten over the head about an issue which is becoming more clear, day by day - quit hurting the planet we live on, lest we turn our cities into dust, and we along with them.

This is written for a young adult audience and being marketed that way but I can tell you, it's fine science fiction, with a great story and well imagined characters that keep you fully engaged.
I loved it.