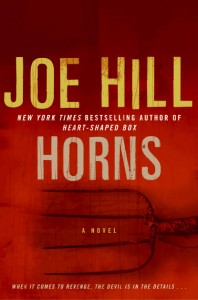 Horns
by
Joe Hill
Available through Amazon, B&N.com, Borders.com
and other brick and mortar bookstores.

In a nutshell, if you like a book that will grab you by the shirt collar and not let go until it's story has been told, then this book is for you.

When we meet Ignatius "Ig" Perrish, he has just recovered from one hell of a bender and can't remember anything that's happened...except for the fact that his girlfriend-since-they-were-teenagers, Merrin, is still dead and everyone still thinks Ig did it, even thought he was exonerated for the crime.  He has also awakened with an inheritance - a set of horns on his head.
Said horns have an exceptional effect on people - they can't resist telling Ig their innermost secrets.  So, Ig decides maybe he can find out who really killed Merrin...and the fun ensues.
Be warned.  We're introduced to a character that has to be one of the most foul since Hannibal Lecter in a lot of ways...Lee Tourneau.  He's not a nice man at all.  He gives new meaning to the word "psychopath".

Joe Hill is Stephen King's son, and it shows.  He's rummaged in Dad's toolbox, but Hill has tools and a voice all his own, make no mistake.  The plot is tight, flashes back and forth in time without confusing the reader, and makes some interesting statements on the afterlife, revenge and what a demon will do when given the task of avenging someone.

Now, you may be asking yourself why I'm reviewing Mr. Hill as Horns is his third book, his second book, Heart-Shaped Box has been optioned for a film (Horns has, too) and obviously he is getting to the established section of authordom?
It's because he's so damned good I want everyone to know it.
I liked Horns a lot.  It winds it's way through it's story and by the time I got to the end?  I couldn't turn the pages fast enough to find out how it was going to end.
When I give a positive review, I like to submit the 13 Questions to the author to answer so you the reader can get to know them better. 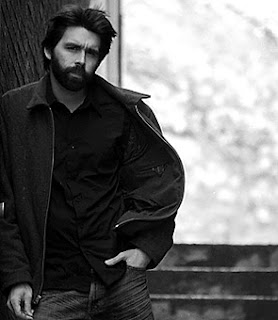 I broached this with Joe Hill through his Twitter page:

WrittenUniverse
@joe_hill I want to review Horns for The Written Universe...but I'll need you to answer the 13 Questions I pose to authors. Are you willing? 6:51 PM Jun 24th via web
joe_hill
@WrittenUniverse Sorry, I pro'ly couldn't swing it. Hope you had some fun with the book, tho. Friday, June 25, 2010 9:04:24 AM via web in reply to WrittenUniverse
WrittenUniverse
@joe_hill No problem - I'll only post at the end of the review you were too busy, but gracious about it (because you were)... Saturday, June 26, 2010 3:15:41 PM via web
For more information on Joe Hill please visit:
Joe Hill Fiction
Joe Hill on Twitter

Posted by Tracey Fleming at 10:25 PM No comments:

The Written Universe Will Go On

I apologize for not posting anything sooner.
On August 11th, my son Evan was involved in a serious auto wreck.  He was unconscious from the time he was taken to the hospital and never regained consciousness.  He seemed to be improving and after a month in the hospital was transferred to a nursing home.  At that point, the doctor was telling us it was between Evan and the man upstairs as to when he would come out of his coma.
On the morning of September 14th, he passed away.
His brain had herniated and was slowly swelling and ended up pressing on his respiratory center and that was what took his life.  There were no symptoms to warn what was happening and the injury was such that it was undetectable by CT scan or MRI.
My son's viewing and funeral was attended by between 300-500 people.  He touched more lives in his 23 years than people 4 times his age ever do.
Evan I will miss you for the rest of my life.
I love you my boy.
Posted by Tracey Fleming at 9:29 PM No comments: