Review: The Chosen: Bloodline Of Darkness

Bloodline of Darkness
by
C. A. Milson
Available through Amazon and
Smashwords as an e-book

In a nutshell, if you have a taste for the demonic and trippy goings on, then this book is for you.

C. A. Milson introduced readers to Alex in The Chosen: Rise of the Darkness.  At the end of that book, (previously reviewed on TWU), A lot of people were dead and Alex was left standing as a survivor to demons running wild.  Alex had come into his powers and all was right with the world.  Or was it?

The Chosen: Bloodline of Darkness starts with Alex living his life...or so he thinks.  He's minding his own business one moment and the next he is thrown into terrible visions and nightmares, each more horrific than the next.  We're talking blood, fire, dismemberment, you get the idea.
Alex is constantly being tortured by these episodes, to the point that he can't tell what is real and what isn't.  Are these phantasmagoria his imagination, or is he really experiencing these things?

As we are jerked along Alex's wild ride, we too, become confused.  Is Alex imagining all this?  Has he really forgotten what happened to him and that he is the Chosen?  When I say we get jerked along, I don't mean that in a derogatory sense.  We become as unsettled as Alex and that is what makes this a suspenseful read.  There were times when Alex had "woken up" from his latest nightmare, that I was holding my breath, wondering if this time he was in his here and now, or about to find out he was still in a land of what the hell?

Alex meets a few souls on his adventure this time out - Nanomi, an enigmatic figure who acts as his guide; there is the return of Tanzac, the demon from The Chosen: Rise of the Darkness (you didn't really think he was going to go away now, did you?); Tara, Alex's neighbor, and...Alex's alter ego.  To say more about who surfaces in this book edges into spoiler territory.

C. A. Milson has again crafted a good story.  It moves quickly and keeps your interest.  It ends with a revelation setting the stage for a third book in this series.  I'm hoping Mr. Milson has that third volume in the works.

For more information on C. A. Milson please visit:
Official website of C. A. Milson
Posted by Tracey Fleming at 12:58 PM No comments:

Email ThisBlogThis!Share to TwitterShare to FacebookShare to Pinterest
Labels: C. A. Milson, demons, horrors, The Chosen: Bloodline of Darkness 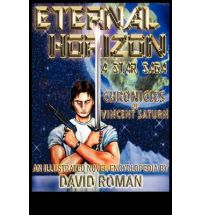 In a nutshell, if a book borrows so heavily from Star Wars you think you might need to contact LucasFilm about possible copyright infringement sounds good, then this book is for you.

I know the old saw "There's nothing new under the sun", but come on people, a little effort at originality isn't expecting too much, is it?

I started Eternal Horizon with high hopes.
Our protagonist, Vincent Saturn, is an FBI agent at the scene of what seems to be a UFO crash.  His curiosity outstrips his order not to investigate, the military is on the way, and he boards the downed vessel.
Next thing you know, Vincent sees a figure inside, obviously in distress and BAM, out goes Vincent, the last thing he sees is white lights.
He wakes up literally in another world...where the horrible EMPIRE is waging war against REBELS.  No one knows what a "human" is or where a planet called Earth is, so he's sort of stuck.  He falls in with the REBELS, who also have a Senator who is a PRINCESS...you think the comparisons stop here?
Nope.
I thought when I got to the introduction of Princess GAIA (Leia anyone?), the parallels would end.  But no.  Vincent is participating in a Rebel incursion, aboard a spaceship, where their leader is being held, and gets into a battle.  He witnesses the bad guy hold out his hand and a weapon files out of the hands of the wielder into the bad guy's hand.  What's that I smell?  Do you smell the Force?  I sure do.
So then we have Sage Warriors who mostly have to learn their Force-like skills, except for Vincent who was given his when he tried to aid the person in the downed vessel on Earth.  Wait.  Where have I see that before?  Isn't this like when Obi Wan says if he's stricken down he'll be even more powerful than Vader can possibly imagine?  Hey!  Yeah!  It's just like that!
There's a climactic battle between the good guys and the bad guys...which ends predictably.
There's the budding love interest between Vincent and Gaia, with a predictable outcome.
And last, but not least, there's the predictable ending with one of the BIG BAD GUYS wanting Vincent Saturn brought to him...at all costs, thus setting the stage for.......*drum roll*........The Hunt For Saturn.

I swear I'm not making this up.
It's fine to use elements as a nod to a previous source.
It's also fine to use a few more to make an homage.
It is not fine to use so many that your work starts to look like someone else's work.

At the beginning I had high hopes for this book.  The characters were engaging, the action moved well, and the dialog, set pieces and action sequences were good.  At one point I was all set to contact Baen Books, a publisher of science fiction and say, "Hey you guys need to look at this writer!  I think he's on to something!"
Sadly, as the book wore on and the Star Wars elements stacked up, I felt more like contacting George Lucas and telling him he might want to file an injunction.

Mr. Roman has the writing skills...all he needs are some original ideas to put with them.