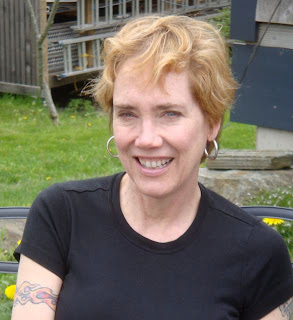 1. Name one thing you miss about being a child.
Losing myself for hours in a a make-believe world in the woods with my friends.


2. Do you have any phobias? If so, what are they?
Not really.  I don't like extremely large hairy spiders or scorpions.


3. Are you a collector of anything and if so, what?
I'm more of a forager than a collector: I find cast-off things, broken plates and furniture and whatnot, and fix them up or display them.  We have a lot of first editions of wonderful books, but my partner collects those more than I do.  I have some photographs from the NYC punk scene in the 1970s, and a beautiful photo by Peter Beste, and an original paintings by the British visionary artist Donald Pass, but they don't really constitute a collection.  More just my magpie sensibility.


4. You're about the walk the Green Mile - what do you have for your last meal?
Gilled lamb chops, rare, with garlic.  A nice salad.  A baked potato.  A bottle of good red wine, creme brulee.


6. Who is your favorite author?

7. What musical artist are you currently into?
The Norwegian Black Metal band Enslaved.


8. Have you ever had an imaginary friend? If so, who are they?
When I was little, I had an imaginary friend named Karen Cowgirl.  She was ... a cowgirl.  Bandanna, boots, hat, western shirt, lasso.  I also had an invisible pet mouse named Celery.  When my mother asked me why he was called Celery, I indignantly told her "Because that's his NAME."


10. What is your current desktop wallpaper?
A beautiful, moody, snowswept landscape featuring the Norwegian musician Gaahl, by the photographer Peter Beste.  I own the original print, and it's gorgeous.


11. You're at a Chinese buffet - what goes on your plate?
Dim sum in all its forms.


12. What person now deceased would you most want to spend some time with and why?
William Shakespeare.  For the obvious reasons ...


13. What are you currently reading?
For review, a not very good book I won't name.  For myself, a reference book on ancient Norse religion.

Posted by Tracey Fleming at 9:35 PM No comments:

Available through Amazon, Borders, Barnes and Noble and other brick and mortar bookstores near you.

In a nutshell, if you like atmospheric, evocative explorations into the human condition, in a time and place not too long ago, this is the book for you.
Elizabeth Hand takes us on a journey to Kamensic, Maine, where life is idyllic at best.  A town full of actors, actresses, artisans, and musicians.  We are introduced to
Kamensic circa 1970 where we meet young Charlotte "Lit" Moylan at a party in a mansion called Bolerium.  It is a fantastic place of sights and smells, of party revelers, of debauchery hinted at but not quite seen.  In the middle of this is one Axel Kern, friend of the Moylan family, godfather to Lit.  He's a filmmaker and a madman...and something more.
As time goes on and Lit grows to teenage-hood, her godfather has returned to Kamensic to begin a new film project, and to open Bolerium up once again, and throw a party to end all of his previous efforts.  Lit is caught up in a series of encounters that boggle the mind - there were times I started to wonder if Hand had dropped acid as she was writing as her set pieces became more and more fantastic.    There are mysterious orders, the Benandanti and the Malandanti, both hinted at tantalizingly; one can't help but want to know more about them and how they play into the melange Hand so skillfully creates.
What is Lit's place in all of this?  That is where the mystery so beautifully lies.
Is there anything really horrific about Black Light?
At times, yes.
At it's heart, it's a coming of age story about a young woman presented with a future that has been predestined for her...or has it?

I've read other novels by Hand and am never disappointed at the way she weaves words together.  Allow me to cite this paragraph:
Everything gleamed with a primal intensity: the crimson and indigo of the carpet so saturated they looked wet, the gold letters on the spines of books sparkling like flame.  Decanters on a small round table glowed as if they held paint rather than liqueurs - emerald green, blood-red, sunflower yellow.  A daybed  was heaped with tapestried pillows and there was a small cast-iron woodstove set into one wall, its isinglass window glowing beneath one of several beautifully carved plaques inscribed with Latin phrases...

Black Light is a voyage into the dark fantastic, some of the finer dark fantasy writing available today.
Try Elizabeth Hand.  You won't be disappointed.