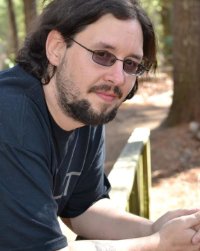 1. Name one thing you miss about being a child.
That feeling of having all the time in the world to do whatever you want to do.  There were no boundaries, no limits.  The clock wasn't going to "run out", eventually.  The day-to-day worries and responsibilities of adulthood . . . it all seemed incomprehensible, a lifetime away.   Your loved ones weren't going anywhere, and you'd be together for a long, long time, everyone healthy and carefree.

2. You're hosting a dinner party. What is the menu? Do you cater or make it yourself?
Spaghetti.  And my wife makes it (are you kidding?  I'm useless in the kitchen, would probably scorch a can of tuna).

3. Are you a collector of anything and if so, what?
Not really, other than buying books obsessively.  But I'm a reader, not a collector.  I have a two or three shelves stocked with signed limited editions, but for the most part I prefer an old dog-eared copy over a pricey edition that makes me feel like I should wear gloves if I get anywhere near it.  I'll also pick up a comic book now and then, usually horror stuff or the occasional Batman title.  But I'm definitely not a "collector".

4. You're about to walk the Green Mile. What do you have for your last meal?
My wife's spaghetti and a single glass of Jack-n'-Diet-Pepsi.

5. Physical book VS. an E- reader. Your preference and why?

Physical book, all the way.  I don't care for reading more than news-feeds or Facebook on a computer screen, cellphone, Kindle, whatever.  I understand why it appeals to many people -- and my own aversion to e-readers doesn't prevent me from publishing my own work in that format! -- but it's not for me.  Give me the feel of an old-fashioned book any day.  I even love the way they smell.

6. What are you currently reading?
PROMISE NOT TO TELL by Jennifer McMahon, and AVENUE X by Nancy Collins (one of my all-time favorite short story writers).

7. What musical artist are you currently into?


Been listening to a lot of John 5's work lately.  Oddly enough, I've never been a fan of show-offy instrumental solo albums, but this guy blows me away.  He's such an amazing guitarist.  While I do enjoy a few songs from Rob Zombie and Marilyn Manson (the latter more-so than the former), I think Mr. 5 is wasting his talent when he aligns himself with those bands.  He's so much better than that.

8. Do you have a hidden talent?
I'm actually a pretty decent shot if you put a basketball in my hands.  Especially long shots, beyond the 3-point line.  Don't guard me, though.  Just let me throw it in the basket, uncontested.   LOL

9. What is your favorite word?
Acetaminophen.

10. What is your current desktop wall paper?


A picture of Batman brooding.  I'm a huge fan of the Bat, like I mentioned before.

11. You're at a Chinese buffet. What goes on your plate?
Oh, man, I love Chinese.  Definitely two or three egg rolls, some crab Rangoon (sp?), some rice, and sweet n' sour chicken.  You've got me in the mood for Chinese now.  Think I'll have that for dinner tonight . . . .

12. What kinds of books make up your personal library?
98% of it is horror and suspense, but then there's the occasional comic book . . . a few nonfiction book about movies, crime, or the craft of writing . . . even some humor.  My readers might be surprised to learn that I'm a pretty big Jodi Picoult fan too.  I know Picoult's got a reputation for being Oprah Book Club kinda stuff, but I've loved her work ever since I read THE PACT.  The human element in her stories is what hooks me.

13. What advice would you give an aspiring author?
Tell a good story.  Don't try too hard to impress.  Poetic prose will come, without forcing it.  It's all about the flow.  Most readers want you to tell them a good STORY, first and foremost.  Don't bore your reader.  Write a story so enthralling that you wouldn't be able to put it down unless someone was holding a gun to your head . . . and the folks who buy your work won't be able to put it down either.
Posted by Tracey Fleming at 3:16 PM