Tales From the Trench: Stories of a Former Book Seller 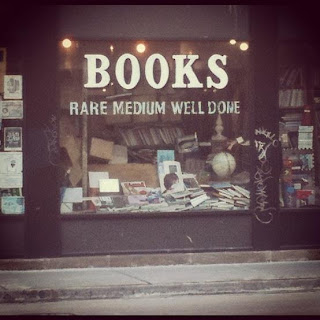 I was a bookseller.
I started at Taylor's Books on Camp Bowie Boulevard in Fort Worth, TX.
At the time, Taylor's, who had started in Dallas, and had three stores there and one in Arlington, billed themselves as "The Southwest's Largest Bookstore".
At the time, they were. They were the Neiman Marcus of bookstores.
I was part of the crew who opened the Fort Worth store, and business was brisk.
I started out as a bookseller, whose section of responsibility was Art, since that had been my major in college. I had to shelve the art section and make sure it was neat and in order.
Other duties included helping any customer that came my way, answer the phones and help who ever was on the other end, and take a turn at a register up front.

The store was huge by the current standard.
At the time, the other book stores in existance were Walden's, Cole's and B. Dalton and they were all located in the mall. There were a few other bookstores in Fort Worth at the time: J. North, which was right down the street from us, and Thompson's and Barber's bookstores in downtown.
You could have fit those stores inside Taylor's easy.

Taylor's also had a feature none of the other bookstores had besides a lot of space and a varied and interesting stock: if a customer came in looking for a specific title and we carried it, but we were out of stock on it, we had the capability of looking the title up in our system and could see which one of our other locations had a copy in stock. Then we could have it transferred to our store for the customer in one day.
We also offered a fairly comprehensive special ordering system with our two wholesalers: Baker & Taylor and Ingram. If we didn't carry the book and couldn't special order it through a wholesaler, the last resorts were to check Books In Print (three volume set of books of every book in print in the United States, sometimes foreign presses listed), or...call a competitor and see if they had the title and would be willing to hold it for the customer. You may be wondering if calling another bookstore wasn't shooting ourselves in the proverbial foot, but the reasoning was, if I found you the book you were looking for, even if I ended up sending you to another bookstore, you'd remember it was I at Taylor's that went the extra mile to find it for you.

Over time, I was promoted to the Customer Service Desk.
Customer's would come up with some wild requests.

I'll never forget this little old lady who came to the desk and asked earnestly, "Do you have a book about a cat, that's green, with a picture of a cat on page 5?"
As a matter of fact, we did - it was Cleveland Amory's book, The Cat Who Came For Christmas.
When I took her to the shelf and put it in her hand, she was amazed.

During that same Christmas, we had a promotion going with the offer of free gift wrap. The pattern wasn't very attractive, but hey, it was free. Gift wrap was the purview of customer service, so I spent a fair amount of time wrapping as I was the only one really good at it.
One afternoon, a real challenge came across the counter: a globe, in the box. The box was roughly 12 x12 on all sides. The wrapping paper was about the same size in width. I took the box to the wrapping counter and thought about it a moment, and literally wall papered the box, rather than wrap it. It turned out OK and the customer was happy.

There was the afternoon when I was going through the NYR box, (Not Yet Released) to see if books customers had requested but hadn't been released yet had in fact, been released, and I noticed a gentleman at the counter. I asked if he needed help and he said no, he only needed to use the phone. There was a courtesy phone on the counter for customers to use. I went back to my searching. He stayed on the phone a long time. He hung up and left the counter. He returned a little while later and got on the phone again. He stayed on the phone a long time again. This went on for the better part of about two hours.
Later, the phone was "adjusted" to only dial local calls. It seemed the gentleman in question had been calling over seas all afternoon and had run up an huge phone bill.
So much for courtesy...

One afternoon, Milton, an older man on the staff came into the customer service area quite agitated. I asked him what was wrong and he said there was a woman who wanted books on cheeses, and he had taken her to the cookbook section and shown her the books we had on cheese and she said that wasn't right. Milton kept pointing to the books on the shelf and saying "Cheeses" and the woman kept shaking her head and saying "cheeses" over and over.
Our manager happened to come by and asked what was wrong and said he'd see what the woman wanted. He went through the same thing Milton did...only he realized what the woman was trying to say...in heavily accented Spanish..."Cheeses"...was "Jesus". Our manager led her to the religion section and found the sub section on the life of Christ. The woman was all smiles.
Milton was abashed.

So endeth part one of Stories of a Former Bookseller.
Posted by Tracey Fleming at 11:48 PM